Nature and Wildlife in Antarctica

What to expect from the nature and wildlife of the world's southernmost continent... 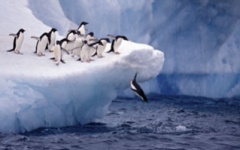 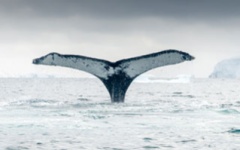 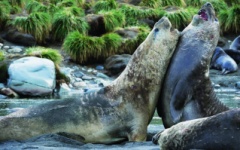 The nature and wildlife of Antarctica is, for the majority of people, the driving factor behind choosing to do a cruise to this southernmost continent. The opportunity to see great numbers of penguins, seabirds, seals and whales close-up, during nesting and breeding season, is the main attraction for coming here. While the Shetland Islands and the Antarctic Peninsula are included in most cruise itineraries, wildlife enthusiasts should also consider South Georgia and the Falklands for their abundant seabird and penguin colonies.

During winter, Antarctica is a frozen and waterless continent, which makes it fairly inhospitable to life. Classified as a polar desert, it is only in the summer months when the ice melts slightly that Antarctica is able to support wildlife, and penguins and seals come to the mainland to nest and breed. It is during these months that expedition cruise ships travel south to Antarctica, offering a chance to see courting penguins, nesting albatrosses and newly born seal pups.

For birdwatchers and wildlife enthusiasts, it is worth considering one of the longer itineraries, which take in South Georgia and the Falklands, before heading on to the Antarctic Peninsula. As the waters around South Georgia never freeze, wildlife can survive here all year round. As a result it has two endemic species of bird, the South Georgia pintail duck and the pipit songbird, which is the only songbird found in Antarctica. It also has two of the world’s biggest King Penguin colonies at St Andrews Bay and Salisbury Plain. The quantity of wildlife here is so staggering that in this area it is believed that there is more wildlife per square foot, than anywhere else on the planet.

Equally as impressive, the Falklands are known for their huge population of seabirds, which use the islands as a feeding and nesting site. Home to the largest colony of black-browed albatrosses and the largest breeding colony of thin-billed prions in the world, the islands are a real haven for birdwatchers. Here you can also spot Commerson’s dolphins and Killer Whales as well as southern elephant and fur seals which line the beaches of the Western Islands.

Timing is one of the most important elements in planning a cruise to Antarctica, as which end of the season you travel in will affect which stage the birds and mammals are at in their breeding process. For example, if you travel at the beginning of the season you will see birds courting and nesting, whereas if you travel in December and January, you will see eggs hatching and baby seal pups. Towards the end of the season, February to March, penguin chicks begin to molt and parents take to the seas to fatten up.

When to go to the Antarctic:

The best regions for Nature and Wildlife:

One of the main reasons to embark on an Antarctic Cruise is, of course, to step foot on the Antarctic Peninsula itself. This thin string of islands, covered in a sheet of ice, juts away from the mainland and is shaped like a crooked finger pointing northwards towards South America. Covered in steep...

A white wilderness at the end of the world, a visit to Antarctica is one of those once-in-a-lifetime experiences which only a lucky few actually get the chance to do. No longer a place solely visited by scientists and researchers, Antarctica can now be reached on luxury expedition cruises which...

The southernmost part of the Southern Ocean, the Ross Sea fills the large dent in the continent, just south of New Zealand. Home to the vast ice cliffs of the Ross Ice Shelf, this area is one of the most unforgiving and isolating parts of Antarctica. Due to the colder, more extreme conditions,...

South Georgia is a remote island in the South Atlantic, famous for its remarkably diverse wildlife and for being the resting site of the explorer, Ernest Shackleton. With almost double the amount of breeding birds than Antarctica, South Georgia has many draws for bird watchers and wildlife...

The South Orkney Islands are another group of islands in the Southern Ocean, east of the South Shetland Islands. They are 375 miles northeast of the tip of the Antarctic Peninsula, meaning they are usually visited on route to or from the Antarctic mainland. A huge sub-marine mountain range connects...

Located 296 miles east of southern Argentina, the Falklands are comprised of over 700 islands and are famed for their rare mix of wildlife, brought by the cold, nutrient rich waters of the Falkland Current, which flow north past the islands.